What is an RTD Sensor - Reference Information

What is an RTD Sensor?

An RTD is simply an acronym of Resistance Temperature Detector, a type temperature sensor known as a resistance thermometer which is used for a wide variety of temperature measurement applications. RTD sensors are also commonly referred to as PRT and Pt100 Sensors. There are many styles of RTD Sensor and typically they are Pt100, although Pt1000 is also popular, both are available in a wide range of designs and constructions.

RTD Sensors, usually Pt100, rely on a resistive element with a resistance of 100ohms at 0ºC. This element is generally encased in a stainless steel sheath suitable for most temperature measurement applications. As the temperature changes the value of this resistance also changes providing a reliable and predictable resistance value which can then be measured and converted to display in ºF or ºC by appropriate instrumentation.

RTD Sensors are reliable and accurate especially when higher grade elements are selected. A full explanation of the working principles of RTD sensors is detailed below.

What is the difference between 2-wire, 3-wire and 4-wire RTD Pt100 Sensors?

A full explanation of the working principles of RTD sensors is detailed below.

What is the color code and wiring configuration for RTD Pt100 Sensors?


A colour code and wiring diagram is shown below.

For a detailed explanation of RTD wiring and bridge networks, please click here.

Ideal for rigid stem applications or where the sensor is shorter than 50mm, limited to 250°C. Wide choice of terminations

A wide range of Resistance Thermometers for surface measurements including self adhesive patch, pipe, magnetic etc.

1.5 and 2.0mm diameter sensors ideal for precision temperature measurements where minimal displacement and a fast response is required

Fast response RTD sensors ideal for industrial and other applications

RTD sensors designed specifically for the harsh environments in autoclaves

How does an RTD Sensor work?

﻿﻿﻿The resistance that an electrical conductor exhibits to the flow of an electric current is related to its temperature, essentially because of electron scattering effects and atomic lattice vibrations. The basis of this theory is that free electrons travel through the metal as plane waves modified by a function having the periodicity of the crystal lattice. The only little snag here is that impurities and what are termed lattice defects can also result in scattering, giving resistance variations. Fortunately, this effect is largely temperature-independent, so does not pose too much of a problem.

In fact, the concept of detecting temperature using resistance is considerably easier to work with in practice than is thermocouple thermometry. Firstly, the measurement is absolute, so no reference junction or cold junction compensation is required. Secondly, straightforward copper wires can be used between the sensor and your instrumentation since there are no special requirements in this respect.

The first recorded proposal to use the temperature dependence of resistance for sensing was made in the 1860’s by Sir William Siemens, and thermometers based on the effect were manufactured for a while from about 1870. However, although he used platinum (the most widely used material in RTD thermometry today), the interpolation formulae derived were inadequate. Also, instability was a problem due mainly to his construction methods - harnessing a refractory former inside an iron tube, resulting in differential expansion and platinum strain and contamination problems. Callendar took up the reins in 1887, but it was not until 1899 that the difficulties were ironed out and the use of platinum resistance thermometers was established.

It is now accepted that as long as the temperature relationship with resistance is predictable, smooth and stable, the phenomenon can indeed be used for temperature measurement. But for this to be true, the resistance effects due to impurities must be small - as is the case with some of the pure metals whose resistance is almost entirely dependent on temperature. However, since in thermometry almost entirely is not good enough, the impurity-related resistance must also be (for all practical purposes) constant such that it can be ignored. This means that physical and chemical composition must be kept constant. An important requirement for accurate resistance thermometry is that the sensing element must be pure. It must also be (and remain) in an annealed condition, via suitable heat treatment of the materials such that it is not inclined to change physically. Then again, it must be kept in an environment protected from contamination so that chemical changes are indeed obviated.

Meanwhile, another challenge for the manufacturer is to support the fine, pure wire adequately, while imposing minimum strains due to differential expansion between the wire and its surroundings or former - even though the sensors may be attached to operating plant, with all the rigours of this characteristically arduous environment. Depending upon the accuracy you are after, the relationship governing platinum resistance thermometer output against temperature follows the quadratic equation:

Where: Rt is the thermometer resistance at temperature t; R0 is the thermometer resistance at 0°C; and t is the temperature in °C. A, B and C are constants (coefficients) determined by calibration. In the IEC 60751 industrial RTD standard, A is 3.90802 x 10-3; B is -5.802 x 10-7; and C is -4.2735 x 10-12. Incidentally, since even this three term representation is imperfect, the ITS-90 scale introduces a further reference function with a set of deviation equations for use over the full practical temperature range above 0°C (a 20 term polynomial). The a coefficient, (R100 - R0)/100 . R0, essentially defines purity and state of anneal of the platinum, and is basically the mean temperature coefficient of resistance between 0 and 100°C (the mean slope of the resistance vs temperature curve in that region). Meanwhile, δ is the coefficient describing the departure from linearity in the same range. It depends upon the thermal expansion and the density of states curve near the Fermi energy. In fact, both quantities depend upon the purity of the platinum wire. For high purity platinum in a fully annealed state the a coefficient is between 3.925x10-3/°C and 3.928x10-3/°C.

For commercially produced platinum resistance thermometers, standard tables of resistance versus temperature have been produced based on an R value of 100 ohms at 0°C and a fundamental interval (R100 - R0) of 38.5 ohms (α coefficient of 3.85x10-3/°C) using pure platinum doped with another metal (see Part 2, Section 6). The tables are available in IEC 60751, tolerance classes A and B.

﻿Several materials are available to fulfil the basic requirements of providing a predictable, smooth and stable temperature with resistance relationship. They include copper, gold, nickel, platinum and silver. Of these, copper, gold and silver have inherently low electrical resistivity values, making them less suitable for resistance thermometry - although copper does exhibit an almost linear resistance relationship against temperature.

In fact, because of this and its low price, copper is used in some applications, with the caveat that above moderate temperatures it is prone to oxidation and is generally not all that stable or repeatable. This notwithstanding, it can come into its own in applications where average temperatures over a long stem length are required, especially within the range -100°C to +180°C.

Nickel and nickel alloys are also relatively low cost and have high resistivities and high resistance versus temperature coefficients, making them very sensitive. However, they suffer from being non-linear with temperature and sensitive to strain. They also exhibit an unfortunate inflexion around the Curie point (358°C) which makes the derivation of the resistance to temperature expressions rather more complicated. These materials are therefore restricted to the temperature range of about -100°C to +180°C.

This leaves platinum, which has considerable advantages that make it well suited to resistance thermometry. Firstly, being a noble metal, it has a wide and unreactive temperature range. Secondly, its resistivity is more than six times that of copper. Thirdly, it has a reasonable, simple and well understood, although not entirely linear, resistance vs temperature relationship. Finally it can be obtained in a very pure form, and drawn into fine wires or strips very reproducibly, making the production of interchangeable detectors relatively easy.

Although platinum is not cheap, only very small amounts are needed for resistance thermometer construction its expense is therefore not a significant factor in calculating the overall cost. On the down side, it is contaminated by a number of materials, particularly when heated, so support and sheath materials have to be chosen carefully. Furthermore, heat treatment of the material is particularly important in view of the presence of vacancy defects which are present at all temperatures unless annealed out.

Beyond these materials, molybdenum film resistors are available, with useful, stable ranges around the -50 to +200°C mark. Semiconductor materials, like thermistors made from various metal oxides, are also available, which with the advent of better manufacturing methods and improved linearisers, can cover a very wide temperature range. However, no standardisation of these devices has been achieved, and they are beyond the scope of this guide. Meanwhile, there is a place for germanium RTD’s below 100K, and especially 10K where the resistivity of platinum is too small for practical purposes. However, the resistance/temperature relationship is not exactly trivial and neither is calibration. Then we get into the realms of carbon-glass RTD’s which exhibit negative temperature coefficients and high sensitivity at very low temperatures. Beyond this, there is the rhodium-iron alloy for temperatures right down to 0.5K. 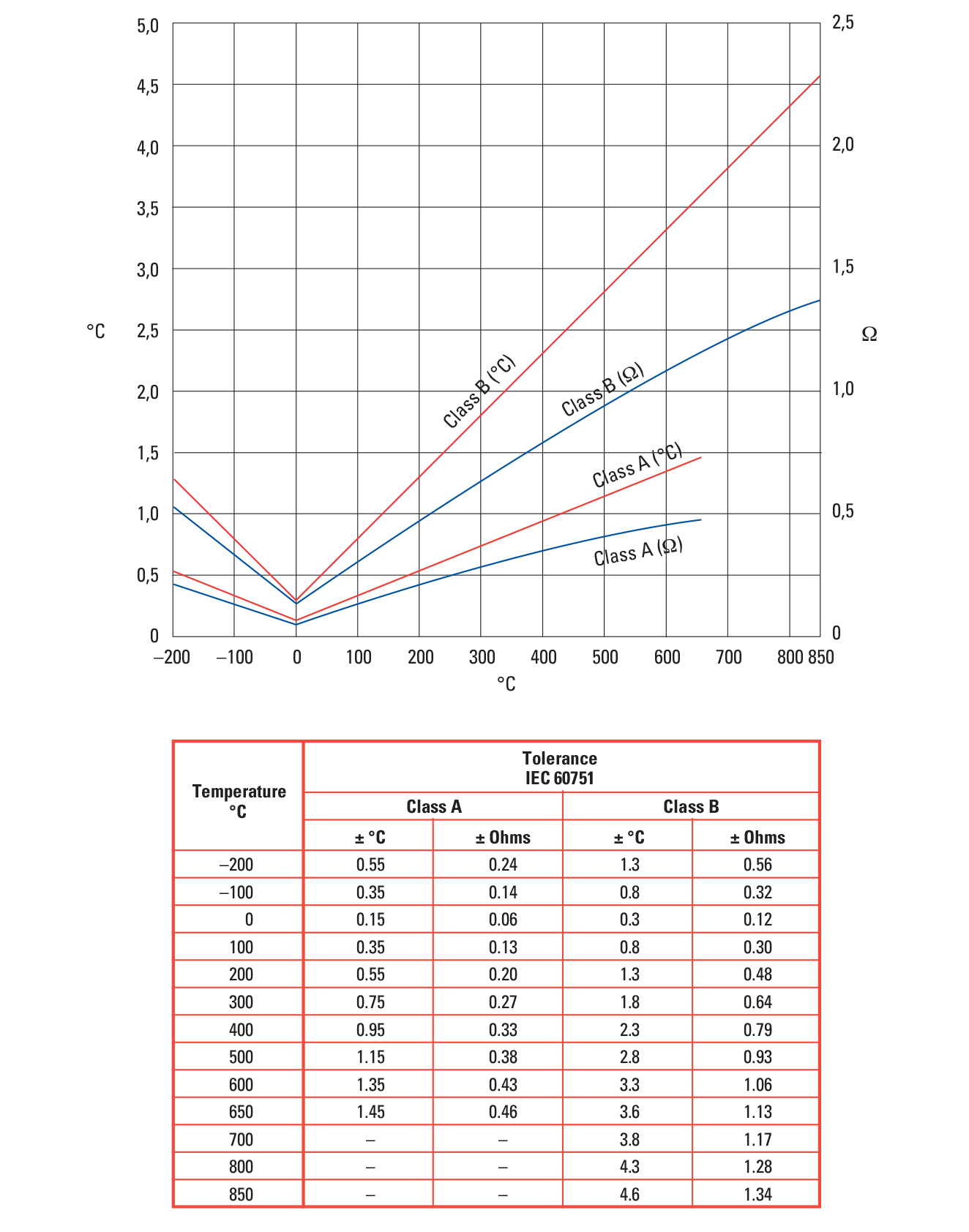 Spring loaded insert assemblies. The end seal is incorporated into a terminal block for mounting into any standard terminal head